The natural nutrition is based on the diet of wild chinchillas, because the nutritional claims are and will remain the same. The gastrointestinal tract and the constantly growing teeth are stressed optimally only by species-appropriate food. This natural diet includes herbs, flowers, grasses, shrubs, including its leaves, fruits and bark, roots, seeds and succulents, but not junk / commercial food or highly processed plant material from the pet store. Depending on the season, the herbs, leaves, fruits and grasses are rich in water or dry; water-storing plants (succulents) are accessible over the whole year. Using them wild chinchillas also quench their thirst. Chinchillas are not adapted to a lot of drinking. 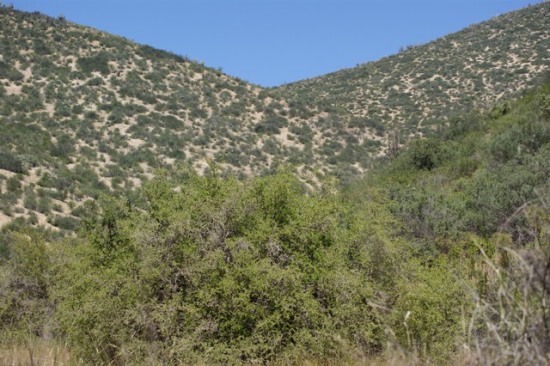 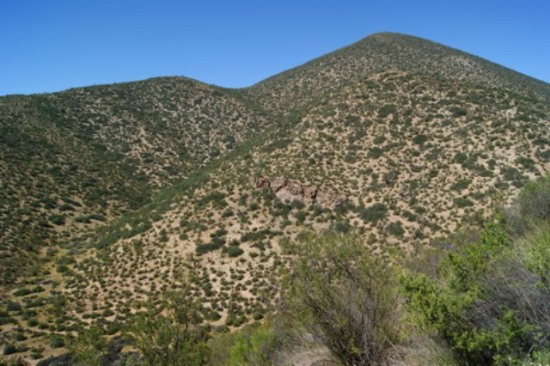 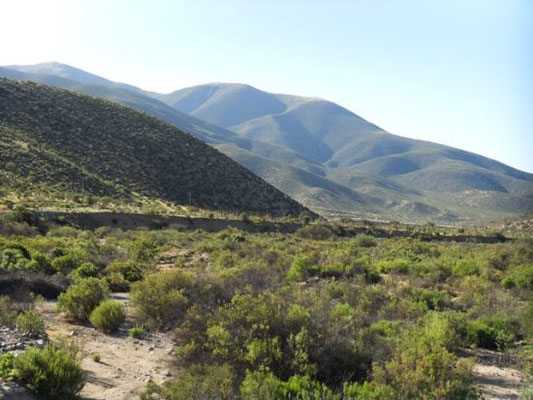 Chinchillas are folivore who prefer leafy plants and then again from the nutrient-rich and fiber-poor leaf tips. The stems, midrib/ribs of e.g. lettuce, alfalfa and dandelion are often shunned when it is given enough food selection.

The small rodents and their digestion are adapted to eat often, but this can only be realized if the food is not quick and long filling. Only then the intestinal transit is not overloaded and the teeth are used perfectly. 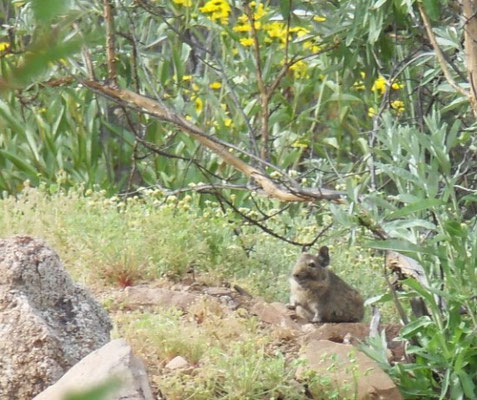 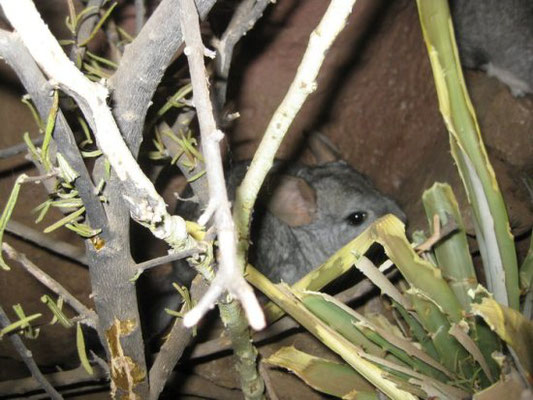 A chinchilla which basically eats concentrate food and in particular commercial concentrate food as pellets and extrudates at the beginning becomes thick and becomes sluggish due to the busy and long digestion. Later, however, it losing weight, because the colon goes on strike: the nutrients can not be absorbed properly, the organs are attacked and the intestinal flora is not in balance. It comes in the worst case to dental disease because the teeth are not enough used by chewing "predigested" food and the lower feed intake. But the problem junk food / concentrate food has often many other health effects such as indigestion, dysbacteria, increasing parasites and yeast, liver, urinary tract and kidney disease. These problems are exacerbated by the one by the synthetic additives in the finished feed, and the other by the so often practiced exclusive dry food without the gift of fresh fodder.

Why fresh food is so important, is explained in detail here: Fresh food for chinchillas? (in German)

What are the disadvantages and problems particular to bring pellets as main food in exact is listed here: A closer look at chinchilla pellets (in German)

It follows that chinchillas should be fed with feed that can be absorbed in greater quantity, not quickly and long saturates and must be thoroughly chewed - all that is not present in finished feed as I said. However, the criteria are met by roughage, dried green fodder and fresh fodder!

Since wild chinchillas (see above) also feed these plants, the natural feeding represents the optimal form of nutrition. 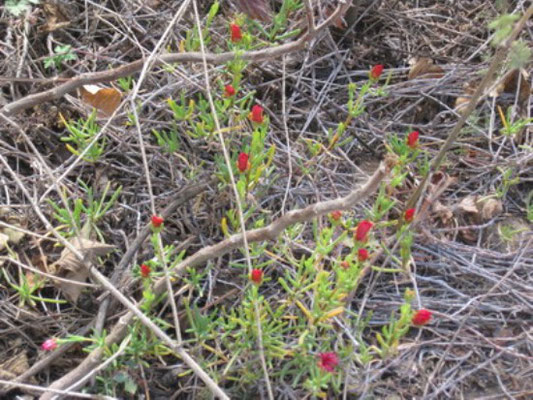 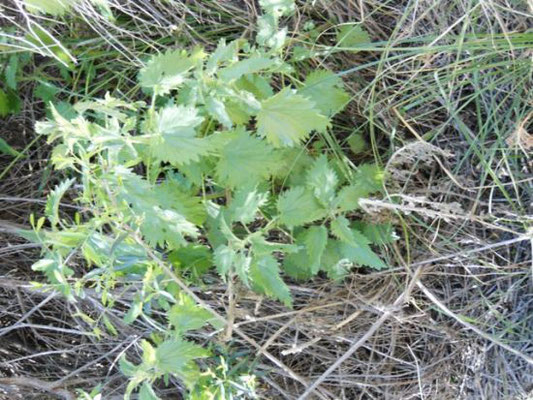 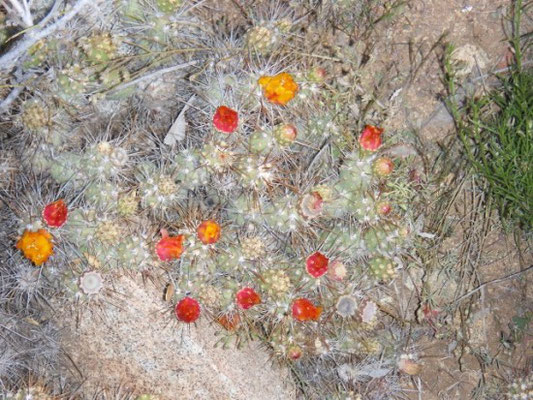 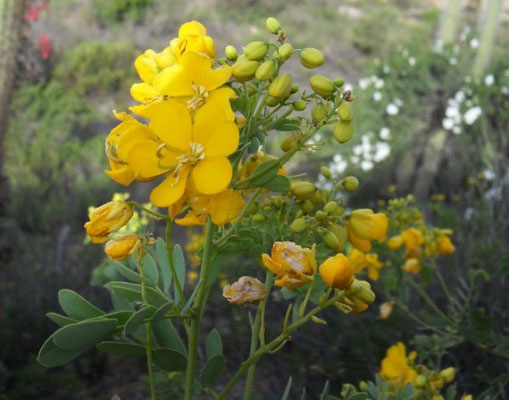 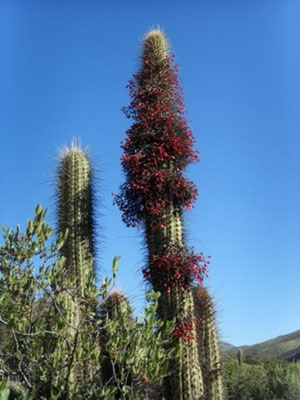 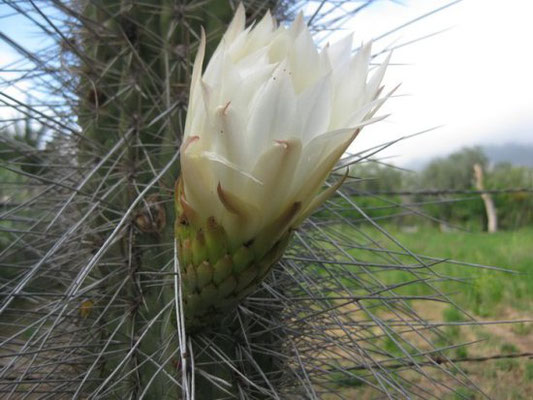 For the natural nutrition of our chinchillas the same food should be given as their wild relatives eat and which keep them healthy.

First of all this is an overview:

In detail, the menu consists of the following components:

High-quality, species-rich hay and dried herbs, flowers, blooms, branches and leaves are the most important part of the chinchilla nutrition. These plants should be daily available in sufficient variety and as a mixture (at least(!) 30 different plants), so that the animals can absorb necessary nutrients and ingredients, the animals have a lot of employment with their feed that prevents behavior problems and so the sufficient tooth abrasion is given. 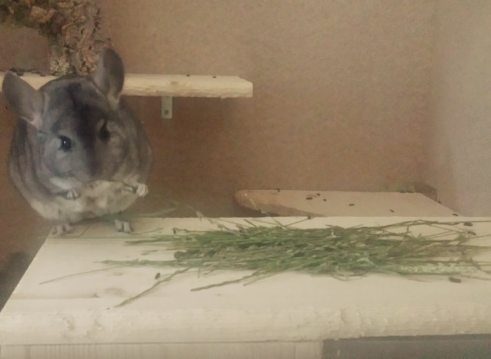 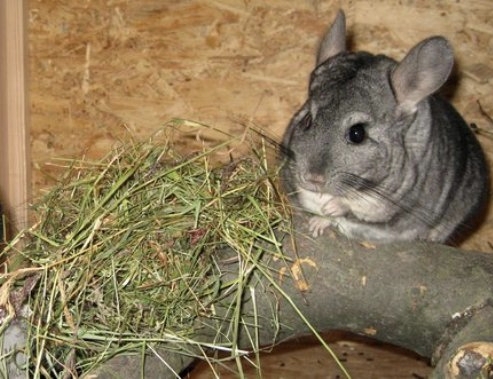 It makes sense on the one hand to mix together all the flowers/blooms and the other herbs and leaves and then offer these two mixtures in two separate bowls.

In online stores or pet shops you get great, instant mixes, you can fall back on and extend, if you does not want to mix yourself completely.

Note: Animals that do not know fresh fodder should carefully accustomed to this (first you give small portion which is increasing gradually), the digestion and the general behavior should be kept well in mind.

As discussed above, green forages represents a valuable part of the chinchilla nutrition. These include primarily wild herbs, grasses and branches (including leaf, flower, bud, bark). These plants should be available for the animals as possible - as already dried - around the clock. Getting not in winter on fresh branches, so should branches at least periodically be dried in summer and offered in the cold season. But even in winter you can still find fresh bamboo, blackberry branches and bare branches. 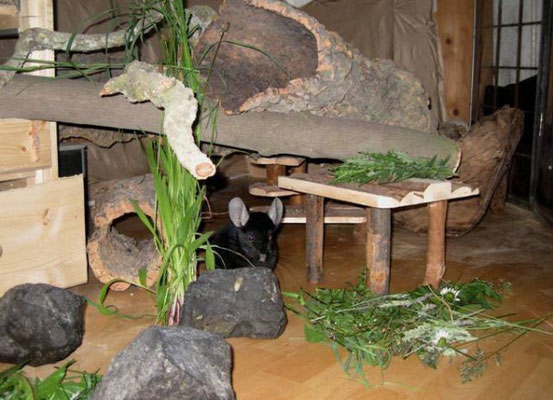 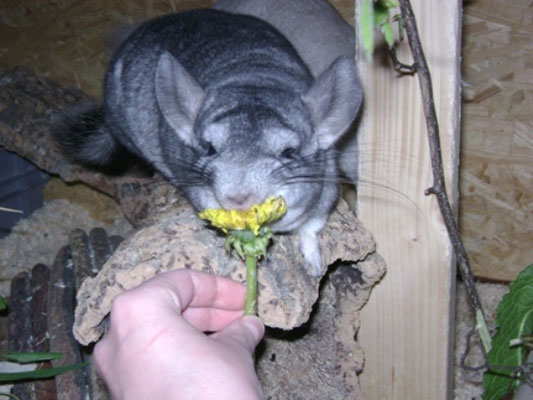 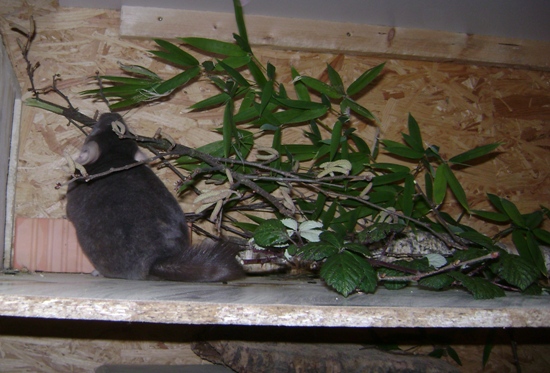 Besides the weeds, grass and branches, you can also feed culinary herbs (such as basil, thyme), edible houseplants (eg Kalisia or Tradeskantia), cat or rodent grass from the pet shop. You can also make them available to animals all the time and they are good replacement for meadow in the winter.

Besides the green forages chinchillas can be offered a serving of fresh vegetables and fruits every evening. At the top there are leafy vegetables such as carrots cabbage and salads (especially chicory, radicchio, arugula, endive, lettuce), later apple, rosehip, pear, grape, wild rose, banana, carrot, some animals sometimes like also cauliflower, broccoli, cucumber, tomato, orange, cherry or Jerusalem artichoke. 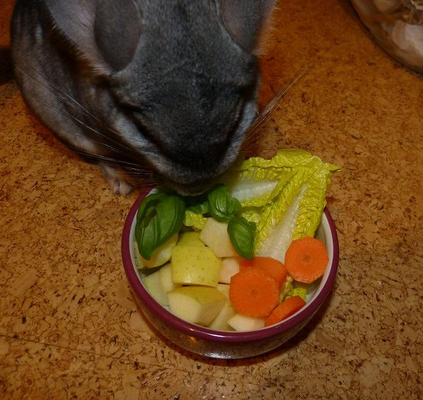 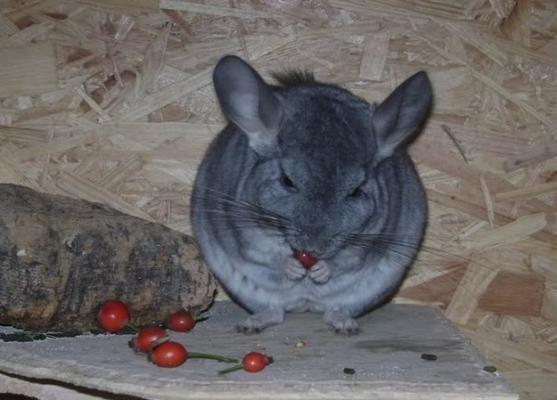 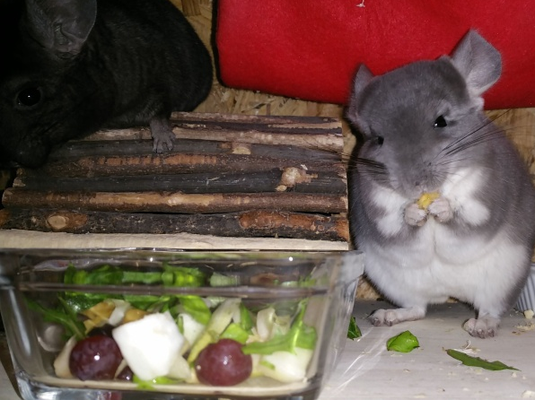 Completely without concentrated feed sometimes it does not work. But instead of resorting to problematic commercial animal feed, one offers a species-rich mixture of various seeds in the near-natural diet, which are also eaten by wild chinchillas, even if in very small quantities.

Chinchillas in growth, during lactation, pregnancy, illness and underweight can get 1 tsp of concentrated feed 2-3x a week, the maximum amount is 1 tsp/day/animal. Adult, healthy animals should eat even less of seeds. In fact, most chins fed as we recommend do not need seeds at all. 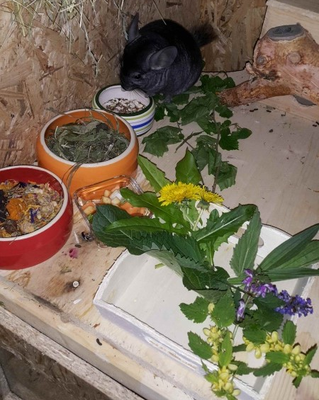 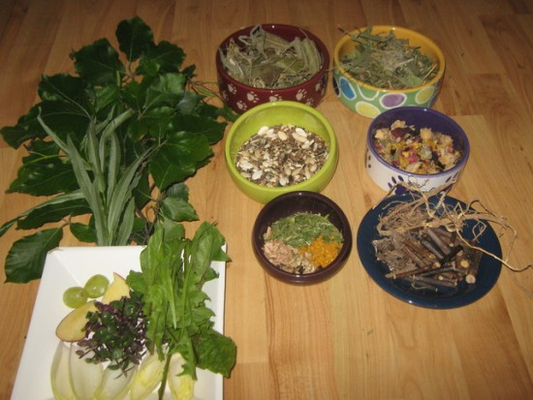 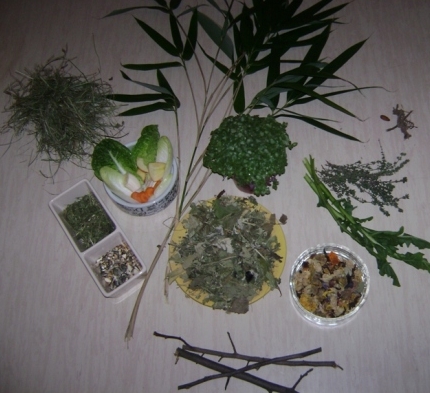